by Marty Willett, GABBA Chairman Emeritus and GMHF Visitor Services Manager
(This article appears in the Spring 1999 issue of Backstage, the official publication of the Georgia Music Hall of Fame and is published on GABBAnet by permission of the GMHF.)

The Allman Brothers Band, founded thirty years ago in Macon, Georgia, has had its share of tragedies and triumphs,but the legendary band’s greatest constant has been its equally legendary legion of fans.

Here at the Georgia Music Hall of Fame, where the band has been inducted and enshrined, the contributions of fans have created an impressive ABB collection.

Macon is also home to two active fan organizations that are making sure that the road does go on forever.

Hittin’ ‘The Note is the quarterly Allmanac for ABB fans published by Kid Glove Enterprises, founded by Kirk and Kirsten West. The Wests have also beautifully restored the band’s early communal home on Vineville Ave., the Big House, and offer tours by appointment.

Kirk, a veteran music photographer and historian, record producer, ABB road manager, tour mystic, and official archivist, displays a portion of his “world’s largest collection of ABB memorabilia” in two of the rooms where the band actually jammed. 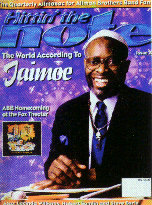 Kirsten, along with co-publisher Pete Sienkiewicz, has created a musical masterpiece with the evolution of Hittin’ The Note. From wonderful past and present photos, to insightful profiles, reviews, and articles, along with real stories from the fans, this glossy mag is a must for any ABB fan. Although dubbed the “official unauthorized” ABB Fan Club publication, HTN still bears the disclaimer “The Allman Brothers Band really digs the efforts of Hittin’ The Note, but is in no way, shape, or form responsible for anything that could possibly go wrong.”

Individual copies of Hittin’ the Note are available in the GMHF Music Store.

Another “blessed but bootleg” organization is the Georgia Allman Brothers Band Association. GABBA is a non-profit foundation of ABB fans, a “family” whose sole purpose is to preserve and promote the ABB legacy in Georgia. GABBA has conducted several preservation projects with the GMHF, Phoenix Sound, at the historic Capricorn Studio, H & H Restaurant, Washington Memorial Library, Grand Opera House, Piedmont Park, and Rose Hill Cemetery, where Duane and Berry are buried. GABBA sponsors four regularly scheduled clean-ups of the historic cemetery that so inspired the early ABB days.

These magical get-togethers are full of memories and music as fans from all over the world converge on the ABB mecca of Macon to honor and celebrate their musical heroes.

Fans should really be pumped and proud this year as the band rolls out its 30th Anniversary Tour, and GABBAfest ’99 prepares to help fans celebrate thirty years of rockin’ with the Brothers.